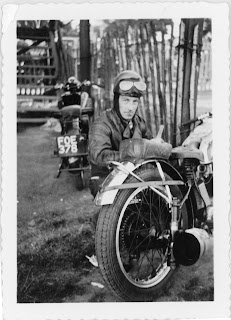 Jock Weddell and his Norton

Originally established as Weddell and Devine in Clydebank, Scotland,  in 1948.  "Jock" Weddell and Victor Devine both were well-known Norton and BSA racers.  As well as his TT successes Jock was one of the first British riders to compete on the European circuits.

Unfortunately, circumstances led to their partnership being dissolved in the late 1950's.  Not to be deterred, Victor established the current shop on May 8, 1960 at the St Georges Cross end of Great Western Road.  Originally selling Iso Milano, Bianchi and Ducati but, by the mid sixties he was firmly established as Glasgow's premier Triumph dealer and by the end of the decade BSA and Norton.  With times-a-changin', 1970 saw Devine appointed as a Honda dealer.

The shop moved from Great Western Road their current premises on Hydepark Street in the Spring of 2002.   Victor Devine Motorcycles is now considered one of the foremost Honda motorcycle dealerships in the United Kingdom.
They have been putting Scotland on two-wheels for over 50 years now.  So, next time you're in Glasgow and are looking to buy a bike to check out Clydebank and the great distilleries of Scotland...oh, sorry...er..the great countryside of Scotland, their address is; 58-60 Hydepark St, Glasgow, Lanarkshire G3 8BW, United Kingdom.