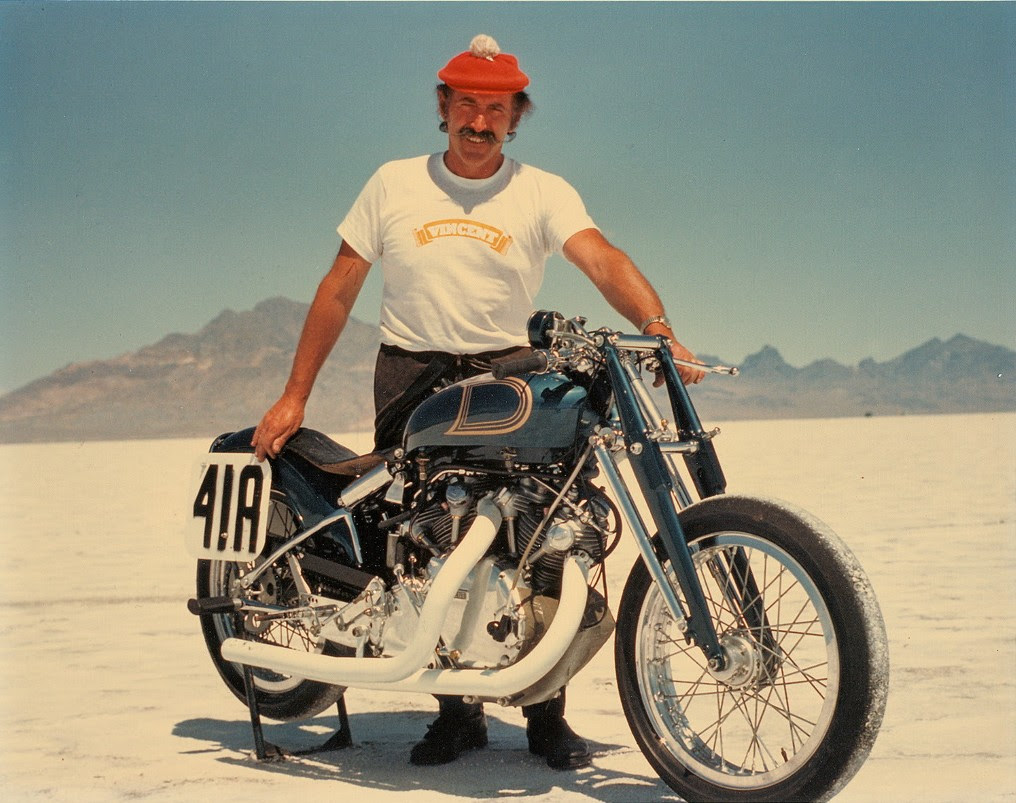 Known across California as "Mr. Vincent", the Vincent  riding, record-breaking, instructor and mechanic, Marty Dickerson is born in Inglewood, California.

Marty Dickerson is best known for setting speed records on his own Vincent HRD Rapide during the 1950's. He set a Class 'C' record of 129 mph on the Bonneville Salt Flats in Utah in 1951. When the record was broken a year later, Marty came back with a 'new and improved' version of his Vincent in 1953 and turned in a run of 147 mph. That record held for 20 years.

While hanging out at a local bike shop stories began circulating about a big British V-Twin that was the fastest thing on the road. Dickerson had a Triumph T100 that he had pushed to 94 mph and the thought of something faster piqued his interest, to say it lightly. He found out that the Vincent distributor and dealer for the bike was in nearby Burbank. One Saturday he rode his Triumph to Burbank to check out the vaunted machine. It was at Mickey Martin’s Burbank shop where he first laid his eyes upon a Vincent, and as odd as this may sound, it wasn’t love at first sight.

"I thought the bike was ugly," Dickerson said, referring to the rough sand-cast engine cases. Still, he would go back to Martin’s shop almost every weekend, hoping to work out a trade for his Triumph. Martin eventually figured out a way to take the Triumph in on trade for a new Vincent. And in October of 1948, Dickerson finally had his rare and speedy British V-Twin.

"It was a little scary to ride," he said of his first experience on the Vincent. "Starting the bike was a real chore and it took racer Tex Luse quite awhile to teach me the technique. On top of that, it had a light switch for a clutch – it was either on or off, real touchy. That was not a good thing to have with a bike that had so much power. I rode the bike home that day, and this was before all the interstates in L.A., so it was on city streets. By the time I made it home, I mastered how to start the thing and how to leave a stoplight without laying a black rubber patch all the way across the intersection."

Marty Dickerson would take his Vincent to Bonneville in 1951 and set a Class 'C' record of 129 mph. His archrival at the time was Sam Parriott, who rode an Ariel Square Four. In 1952, Parriott and his Ariel broke Dickerson’s record on the Flats.

Vincent founder, Philip Vincent heard of the Californian’s efforts and sent him some special cams and exhaust pipes from England. Marty studied the rulebook and found some loopholes that would allow him to do away with the standard seat and replace it with just a small pad low on the rear wheel well. He also turned his handlebars upside-down to give him a more streamlined riding position.

Dickerson then went back to Bonneville in 1953 and shattered the Class 'C' record, turning in a two-way run that averaged 147 mph. During that run, he cracked the elusive 150 mph barrier in one direction. The 147 mph record held for a remarkable 20 years until a Yoshimura Kawasaki Z1 finally broke it in 1973, with a speed of 155 mph.


Marty Dickerson was inducted into the AMA Hall of Fame in 2002.

Today in motorcycle history proudly supports the National Association for Bikers with a Disability (NABD). www.nabd.org.uk
Posted by Unknown at 10:00 AM