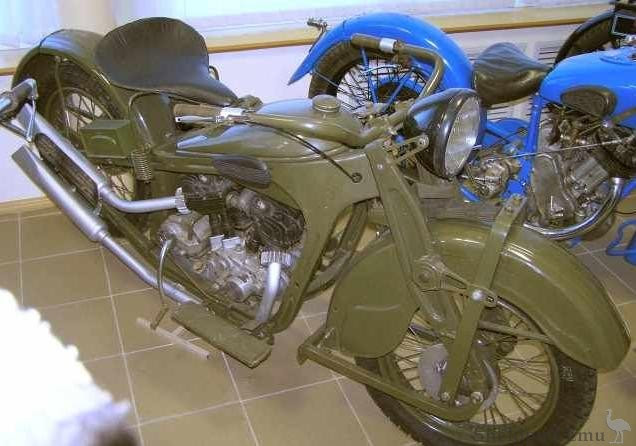 In the end of 1934, PMZ began preparations for the production of the PMZ A-750, with the first three assembled motorcycles put on parade on May 1, 1935 in Podolsk, Russia. Nine more PMZ motorcycles would be presented in Moscow on July 25.

It seems few people outside of Russia have heard of, and even fewer know anything about, the PMZ ­A-750 motorcycle. The bikes were mainly built at the Podolsk Mechanical Installation located in Moscow Oblast, by a branch of the “Singer” company, which by the 1930’s had already had vast experience in mass ­production of sewing machines coupled with precision machining. The factory adopted the making of thin-­walled cast iron moldings, so when the People's Committee for Heavy Industry decided to set up mass production of motorcycles they chose the town of Podolsk, together with steel town of Izhevsk.

At the Izh Steel Plant (Izhevsk), a team of motorcycle freaks run by Pyotr Vladimirovich Mozharov took on designing five models of motorcycles in 1928. These machines were built and passed Russia's rigorous vehicle tests, but were never put in mass production.

The German designer and inventor Ernst Neander began to produce motorcycles with a press-formed frame made from sheet steel in 1927. Having studied this design carefully, Mozharov saw its great advantage for mass-production. He visited Germany in 1928 to learn production organization from Neander. He returned home with piles of engine design plans, books, motorcycle brochures and crates of parts. Mrs. Mozharov was not pleased.

Mozharov chose a press-­formed frame for his A-750. The motor needed to meet the criteria formulated by the Main Department of Machine Building Industry for the Supreme Council of the  National Economy of the USSR: 4-­stroke, two-cylinder 750cc motor, able to adapt to the rough road conditions and capable of attaching a sidecar. After Pyotr and his team visited the Harley­-Davidson factory in Milwaukee, they were in agreement that a 45-degree V­-twin side-valve engine should be used. Though the concept took after the Harley, the resulting engine differed with a number of key design features - a two stage oil pump, the oil tank was made a part of engine casing casting, instead of a magneto Mozharov chose to use a battery ignition with a generator, the headlight was designed to have high/low beam. Among other innovative features the A-750 had an unusual front fork design being a short lever swing-arm type aided by a carriage spring and a vertical U­-bar that provided torsional stiffness and reliability, slightly resembling a BMW.

After all that it proved to be heavy and unreliable. The A-750 was shit-canned in 1939.

Thanks to my friend Ritvars in Latvia for much of  the info.


Today in motorcycle history proudly supports the National Association for Bikers with a Disability (NABD). www.nabd.org.uk
Posted by Unknown at 10:21 AM