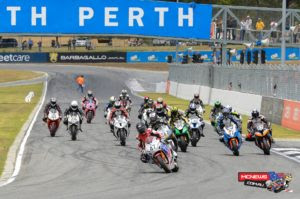 The Kings of Wanneroo goes International as a large contingent of overseas riders head to Western Australia to compete at Barbagallo Raceway Wanneroo.  But, it's the sidehacks who steal the show!


According to the Motorcycle Racing Club of Western Australia's press release this is only the second time in the history of motorcycle road racing at Barbagallo Raceway that such a large number of international competitors will compete in Western Australia.  Not since 1972 have WA motorcycle fans seen such a prestigious lineup when the Pan Pacific Series finale came to Perth with the likes of London born, US based Ron Grant riding a works Suzuki 750, UK rider Cliff Carr on a Kawasaki 750, Daytona 200 winner and AMA Hall of Famer Don Emde aboard his 750 Harley-Davidson, Malaysian Sonny Soh on a 500 Suzuki and New Zealander Ginger Molloy straddling his 750 Kawasaki.


But, to everyone's surprise the most exciting match-up was a supporting act to the Kings of Waneroo - the third and final round of the Australian Sidecar Championship.


Few people expected anyone to match the blistering pace of veteran World Championship competitors Shane Soutar and passenger Jeff Rowe.  Young local siblings Dean and Darren Walker soon threw that prediction out the window as the two Suzuki powered teams bumped fairings repeatedly throughout the opening laps of the first round.


Soutar/Rowe eventually managed to break away in the closing stages of the eight-lap race, their fastest lap though being only .02 seconds faster than the Walker brothers best.  This was a first for the Walkers who were unaccustomed to any serious competition in WA, but this new challenge helped them step their game up a little higher.


The Walker brothers smoked it coming off the line in the second bout and this time around it was Soutar’s turn to give chase. There was no way Soutar was going to be able to pass the home-grown heroes in the corners as the Walker boys virtually took up the whole track, their outfit completely sideways through the turns. Eventually Soutar managed to make a pass and without a broadsided sidecar in front of them at every turn, managed to break away from the Walker brothers to take the win.


Victory in the second race brought enough points for Soutar and Rowe to claim the 2008 Australian Sidecar Championship.  While the Walker brothers took second at Wanneroo their overall season results placed them third in the Nationals.  At only 20 and 23 years-old the tandem of Dean and Darren injected some much needed young blood into the Australian sidecar scene.