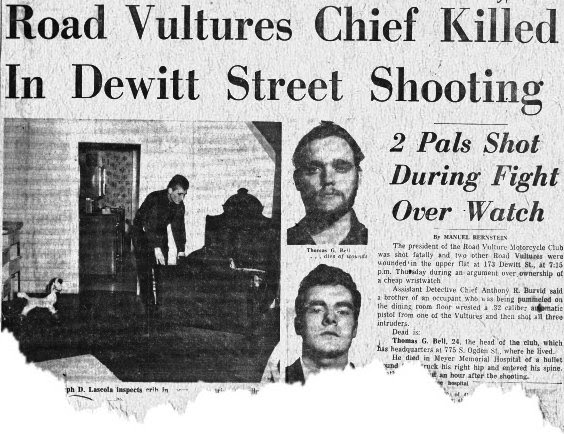 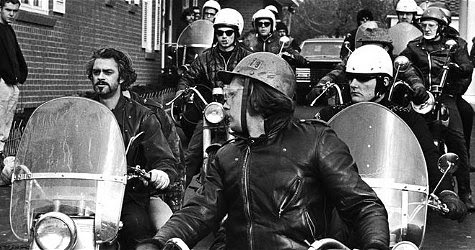 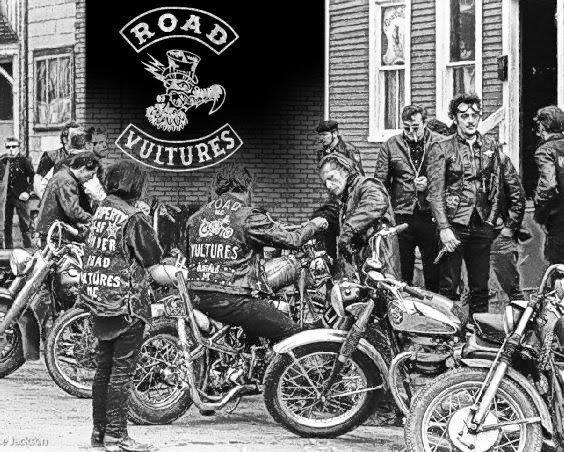 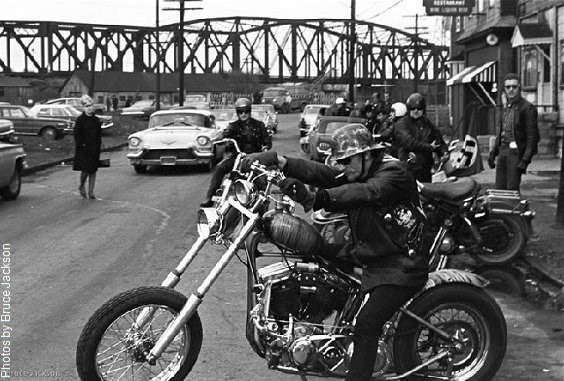 The funeral of Thomas Bell,  President of the Road Vultures MC, takes place under the watchful eyes of Buffalo (New York) police.  From the Buffalo Evening News newspaper...


BUFFALO, N.Y. (AP) - The slain president of the Road Vultures Motorcycle Club went to his grave Monday, the hearse carrying his casket escorted by 40 roaring cycles.

Thomas G. Bell, a bearded, 24-year-old shipping clerk, was laid to rest in Buffalo's Forest Lawn Cemetery after a funeral service in which leather jacketed cyclists mingled with persons in conventional dress.

Members of the Buffalo-based Road Vultures were joined in the crowd by representatives from motorcycle bands elsewhere in Western New York and Massachusetts, Ohio, Connecticut and Ontario, Canada.  Bell's funeral cortege was led by a motorcycle bearing a red flag emblazoned with a Nazi swastika. Next in line was a small flat-bed trailer carrying his flower-bedecked cycle. Before Bell's casket was sealed, someone placed sunglasses on his eyes and a Road Vultures sweatshirt on his chest, atop his blue suit and white shirt.

At the cemetery, a club member stepped forward and poured the contents of a pint whiskey bottle on the metal casket, then tried to smash the bottle against the coffin lid, but without success.

A mimeographed eulogy distributed at the cemetery said Bell "was born to be free and died to be free."

Several plainclothes policemen stood by during the service.

Also in the gathering were Bell's wife, Regina, and their 2-yearold son, Shane.

Bell was shot fatally last Thursday night after, police said, he and two other Road Vultures stormed into the apartment here of Jack Edin, to retrieve an inexpensive watch.

In the ensuing fracas, detectives said, Bell was shot in the back with a pistol by Edin's brother, Walter, 29. The other two motorcyclists suffered leg wounds.

You know on that Monday any poor bastard on a bike, patch-holder or not, was pulled over by Buffalo's Finest. Tuesday's edition claimed 17 unshaven/suspicious/motorcyclists were arrested, mainly for traffic violations.


Today in motorcycle history proudly supports the National Association for Bikers with a Disability (NABD). www.nabd.org.uk
Posted by Unknown at 10:49 AM