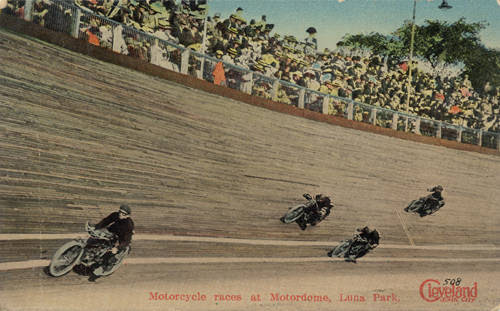 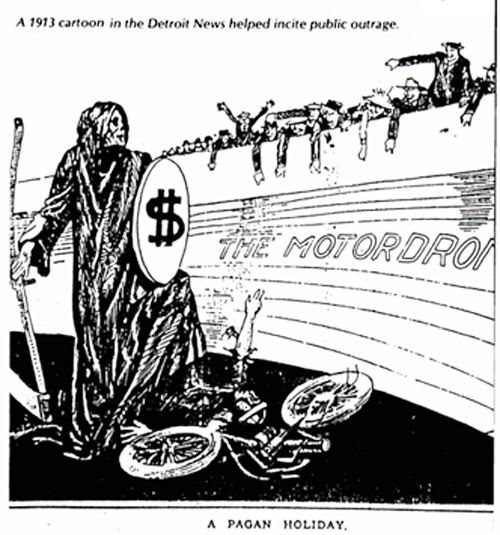 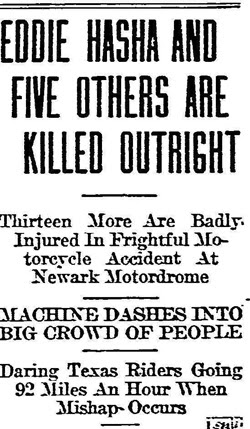 At Valisburg Park in Newark, New Jersey, Motordrome racing has it's darkest day.


The 8,000-seat Newark Motordrome opened on July 4, 1912 and regularly ran motorcycle races on Sunday afternoons. Racing fans from in and around Newark would pack the grandstands that ring the 60-degree, quarter-mile wooden "saucer" to see riders from around the country compete at speeds approaching 90 to 100 mph.

On Sunday afternoon, September 8, Eddie "The Texas Cyclone" Hasha, John Albright, Arthur Chapple and Ray Seymore prepared to square off for a Five-Mile race (20 laps). On the third lap Eddie Hasha was leading fellow Indian rider Ray Seymore when Hasha's bike developed a hiccup, and Seymore took the lead. Eddie adjusted his carburetor, and then he re-entered the race at the top of the track. His bike suddenly took a sharp turn crossing the black warning line at the top of the racing surface. Travelling about a hundred feet along the three foot spectator railing at the top of the track, striking numerous spectators and then struck a large roof post and was hurled into the spectator seating area. Hasha's bike slid down the banking into the path of fellow rider John Albright, who was thrown from his bike.


When the smoke finally cleared Eddie Hasha was dead of a broken neck, John Albright was seriously injured, and five spectators were either dead or dying. The crash, and resulting carnage, caused a stampede out of the grandstands, injuring numerous spectators. Albright died from his injuries later that day.

The final death toll from the horrific crash was eight, which included Hasha, and Albright, along with six spectators. Three of the dead, were young boys twelve to fourteen years old.

The Motordrome accident was the single worst in Newark motorcycle racing history. Newspapers across the country began tracking their local motordrome death tolls for the next year. Editorial writers and cartoons called for banning "Murderdromes" and motorcycle racing.


Although the grand jury exonerated Motordrome management Oct. 26, 1912, its property was sold for $9,500 at a Nov. 24 sheriff's auction to satisfy a civil judgment. Inquests and litigation ended when a circuit court jury awarded $328 to four injured victims in a Jan. 15, 1914 judgment against EMRA.

A Sept. 12, 1915 fire leveled the Motordrome. An Essex County Park Commission hired a demolition crew to clear the rest of the amusement center for Vailsburg Park in 1917.

Today in motorcycle history proudly supports the National Association for Bikers with a Disability (NABD). www.nabd.org.uk