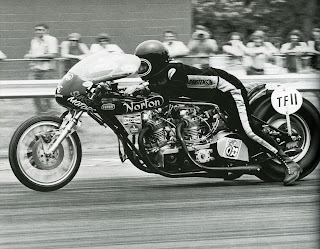 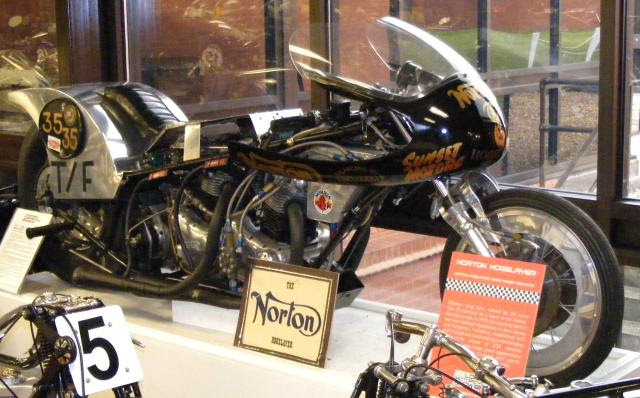 At U.S. 30 Dragstrip in Hobart, Indiana, T.C. Christenson becomes the first man to exceed 180 mph in the quarter mile aboard his double-engine Norton 'Hogslayer'.

On Nov. 19, 1972, racing against 10 of the top motorcycle dragsters at Ontario Motor Speedway in California, Christenson achieved an 8.52 second quarter mile. His bike — known as "The Worlds Fastest Norton" later broke its own marks with a 7.93 second, 176.12 mph run, also at the famous California dragstrip.

It was at the 1969 Bowling Green motorcycle drags that Christenson saw Boris Murray’s double-engine Triumph. That bike inspired him and his partner, John Gregory, to begin building their first twin-engine Norton at their shop in *Kenosha, Wisconsin.


"Kenosha was the perfect place to build racing motors," Christenson said. "It was a factory town with machine shops everywhere and it seemed like the whole town got behind us and pitched in to help build our double-engine bikes."

Three different versions of the double-engine Norton were built in 1970 and '71. By 1972 the third version of the Hogslayer (named for its ability to beat the dominant Harley-Davidson drag racers of the day) became the most advanced drag racing bike in the country at the time. It featured many firsts, including the first slipper clutch, fuel injection, a two-speed transmission (based on an overdrive unit from a Rambler), revolutionary aerospace materials used in an aerodynamic frame that utilized a rear racing slick specially made for the Hogslayer by M&H Racemaster that was eight inches wide, twice the then normal tire width.


With the 300-plus horsepower in the 1,620cc nitro-burning Hogslayer, Christenson ultimately ran in the mid-7's at 180 mph and for most of the early-to-mid-1970's he was the fastest drag racer on  planet earth. In 1972, he won the NHRA U.S. Nationals in the first year Fuel Bikes were part of the program. In 1973, he lost only once and set the A/Fuel Bike elapsed time record with a 7.83-second run en route to his Top Fuel win at the NHRA National Motorcycle Record Championships in Bowling Green, Kentucky. He set numerous world records and was featured in wide array of bike magazines. Christenson won the official NHRA Fuel Bike National Championship in Indianapolis, Indiana, in 1976.


'Hogslayer' is now permanently exhibited at The British National Motorcycle Museum in Solihull, West Midlands, UK. It was one of the featured motorcycles in the grand re-opening of the museum.


*Kenosha, Wisconsin, is home to the legendary Mars Cheese Castle.

Today in motorcycle history is a proud supporter of the National Association for Bikers with a Disability (nabd).  www.nabd.org.uk
Posted by Unknown at 10:18 PM