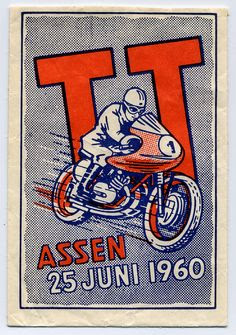 Fighting off fellow MV rider Gary Hocking at every turn in the 125cc race, Carlo Ubbiali takes the flag and is quoted afterwards as saying "that was toughest race I've ever had", when asked about his MV teammate, Hocking.  In the 250cc class Carlo found himself battling for every mile of the TT Assen Circuit with his Rhodesian teammate nipping at his heels. When the checkered flag is waved he would once again take the victory. When a South African reporter asks about his win, he smiles and says, "That was the toughest race I've ever had."


Arguably one of  Italy's greatest motorcycle racers Carlo Ubbiali would retire while still in his prime at 30. His nine World Championships tie him with Mike Hailwood and Valentino Rossi for third place on the championship win list behind only Giacomo Agostini and Ángel Nieto.

Today in motorcycle history proudly supports the National Association for Bikers with a Disability (NABD).  www.nabd.org.uk
Posted by Unknown at 9:24 AM